Showing this weekend at the Contemporary Art Fair Surrey at Sandown Park. “It’s a Small World” started life as an experiment with gold iridescent paints and heavy gloss mediums. Layers and washes of gold have been applied over the surface. Which has been enhanced with bronze,silver and cadmium red. Look closely, you will see textures and something else…..

I have been delving into surrealism. Following a dream about goats going up the mountainside. I decided the goats deserved their own world. Welcome to pineapple goat world. The pineapple landscape has been created from paper collage which is a painted map of Reigate.

You can see the map more clearly in the leaves of the pineapple. The collage has been applied and then outlined with gold tube lining. The small goats are Toggenberg goats.

If you are curious about the Little Gems Collection- I would love to meet you and answer your questions. I am exhibiting at The Contemporary Art Fair Surrey 2022 this weekend. 4th- 6th March 2022 at Sandown Park, Esher, Surrey

You can book tickets here SANDOWN CONTEMPORARY ART FAIR 2022. Use code SS-COMP for free tickets on Saturday and Sunday or code PV-COMP for the private view this evening. (friday 4th March)

CLICK HERE TO SEE MORE OF THE LITTLE GEMS COLLECTION for sale this weekend.

This year, I have been working on a new collection called Little Gems. Showing this week at the Surrey Contemporary Art Fair 2022 I wanted to experiment with new ideas and push my materials further. By making small pictures I have been able to explore more ideas and techniques.

Here is Spirit Faces inspired by a book on Inuit Masks and ceremonies I found in a local book store.

Look closely and you will see scratch marks, this is because this piece started out as an exploration of African Textiles.

Look again at the bottom and you will see textures, these were applied before the idea of Spirit Faces emerged. You will notice that the paint is slightly iridescent. The top textures have been sanded.

I am intrigued by people and cultures and as a kid spent hours in the library reading books on anthropology.

When it was finished, I decided to explore the idea further. Spirit Faces 2 started life on a small piece of oil paper. Using the Sgraffito method I etched in the faces. In this version all the textures are on top. Look closely and you will see glass, gold and iridescence. The paper has been collaged onto canvas board and heavy mediums add more textures onto the surface. The shine comes from the mediums and iridescent gold and copper paints.

If you are curious about the Little Gems Collection- I would love to meet you and answer your questions. I am exhibiting at The Surrey Contemporary Art Fair 2022 this weekend. 4th- 6th March 2022 at Sandown Park, Esher, Surrey

You can book tickets here SANDOWN CONTEMPORARY ART FAIR 2022. Use code SS-COMP for free tickets on Saturday and Sunday or code PV-COMP for the private view on Friday evening

I am opening my studio in Epsom again this October.

I look forward to meeting you and showing you my work.

Last chance to buy from the new collection this summer.

Rue is exhibiting with First for Art, open till 4.30pm on Sunday 27th June 2021. Denbies wine estate, London Road, Dorking RH5 6AA. Free entry & parking, cafe and refreshments on site. Open to all. Hope to see you there.

You can purchase from my new collection of paintings + jewellery, mugs, mousemats, prints etc

I have been busy creating new artworks

The Rue Stanley Art studio is easy to find. It is 2 minutes from Epsom racecourse.

I am delighted to say that Marc the electrician has done a great job! Late starting the carpentry so no storage unit yet….

Varnishing my picture of the Mars Glacier.

I have started a new collage- inspired by the aerial view of glacial fault lines on Mars.

Where you will be able to see the inspiration behind the paintings and gain an insight into my processes.

There will also be an opportunity to purchase paintings,prints and unique handmade jewellery.

Covid safe rules and social distancing will be observed.

This week, I have been varnishing hummingbird paintings on my old desk

My old desk is a bit fragile, in my new studio I would like this. Meanwhile…

Hummingbird paintings for sale at my open studio in June 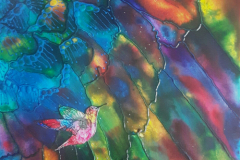 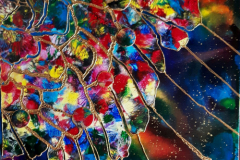 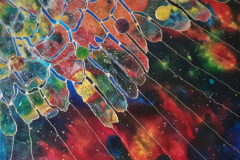 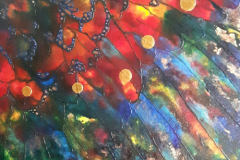 I need a new studio… my studio is so small I nearly brained myself with a lamp!

We started in February 21

I hope it’s going to look like this, only bigger and with more windows!

I am opening my new studio with the Surrey Open Studios program from 6th- 19th June.

Visitor numbers are still limited (due to Govt guidelines) – please email,call or text to book your visit. Text/call: 07799 626596. Email: ruestanleyart@gmail.com. I will be delighted to see you.

Parking is available along Tattenham Crescent, or in the car park at the Tattenhams Beefeater. Coffee, lunch, dinner and toilets are also available at the Beefeater which has wonderful views across the downs.

I had two luxury holidays booked for this year. Although neither were for really exotic destinations, I was really looking forward to them both as an escape from the day to day activity. Now the day to day activities of going out with friends or to an art gallery feel like luxuries. I have managed to do them occasionally, but not as much as I would like.

So, I decided to escape– I was inspired by the story of Antonio Bolivar Salvador from Brazil. Sadly I only knew his story through his obituary in the Economist Magazine.

Antonio Bolivar Salvador Obituary “when he spoke of the Jaguar, lord of the forest, the embodiment of power strength and violence, he would begin to growl deep in his throat. Antonio’s head would move around warily as if he were on the prowl himself. When he mentioned Anaconda the great snake god his hands would slither, swim and twine round each other, getting faster, until still smiling-he might leap from his chair and fling his snake arms around whoever was listening to him.” Extract: The Economist May 30th 2020

As a child, I was fascinated by the people of remote places such as Borneo and spent hours in the library reading about them and seeing their pictures. I found a book on Maori myths and legends which was beautifully illustrated and showed people with very defined features and sculptural tattoos. Antonio Bolivar Salvador’s face reminds me of my childhood.

So, I escaped to Brazil in my imagination. I have embellished my paintings with stories of Anaconda and Jaguar Lord of Forest. I researched the butterflies and the birds and included them too.

You too can escape to the place of your choice- the libraries are open, so are the art galleries ( till Thursday midnight 5th November)

And, you won’t have to isolate when you get back….

postscript: Looks like we will all have to escape this month via the internet and our imagination, till December…..